In a grey muslin veil
The last maiden of April
Sheds her tears of farewell
To earth tolling the final bell.

P.S.: This rainy afternoon of the last day of April disappears into our memory of time, being the experience of the ethos of the time we live in. Goodbye to April, 2018…

I find and lose; you wonder in vain
How it can be.
I know not, but I know the pain
is deep in me.

It was the best of times, it was the worst of times, it was the age of technology and information, it was the age of rationalism, it was the epoch of you-could-do-anything, it was the epoch of upstart, it was the season of Hope, it was the season of Despair, it was the spring of hope, it was the winter of despair… That was how Randy Beaver was thinking while  reposing his starving self  at a snack cart on a sunny Tuesday afternoon. Randy had been seeking employment since he lost a job as a warehouse manager of Pony Express due to company restructuring, but the Fates had not seemed to wink at him just yet. Nevertheless, his evergreen positive mindset and go-aheaditiveness made him vigilant of falling into a bottomless pit of despondency. Besides, the fact that he was a head of his dear family kept him going in spite of all adversaries trying to dispirit him.

“Okidoki. So what’s new in today’s newspaper? Hmm…  A Mountain lion crossed a freeway through a culvert that was about as long as two football fields in Santa Caritas. That must have been quite an adventure for the guy! What a spirit of fortitude and courage! And what else fascinating? Wait a moment! I can’t believe this!” Randy’s eyes were sparkling with excitement and incredulity mixed in wonder as he was reading a notice section, in which Avonlea’s new real estate developer named John Elephant was selling a derelict building on the 3rd Avenue at a half of the original price. 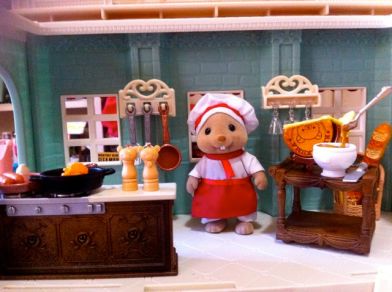 “I have “$50,000.00 in my saving account at the bank, which is enough to buy the building. I can convert it into a nice French restaurant with my being a chef myself. Thanks to my culinary skills inherited from my father who was of a great French cook originally coming from Lyon, I can cook a variety of delicious French meals in homemade style.” Hereupon, the rest of the story became the genesis of Randy’s new and exciting business adventure. What had  once been derelict, nondescript building was a cozy pretty French restaurant named, La Boum, meaning the party in English, which his lovely wife Brenda thought fantastic befitting the menu and the atmosphere they would provide to their customers. 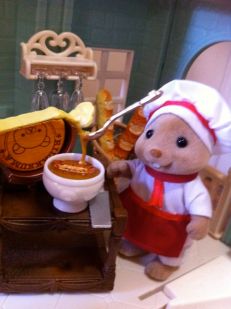 Randy’s specialty was Swiss-styled Raclette made with cheese from Alsace, where his distant paternal cousins live and  provide the best of the ingredients for La Boum at honest prices. In this way, Randy could cut off avaricious middle men and become cost-effective, so that he would devote himself to the quality of the menu he afford to his customers who would regard La Boum as a fine restaurant where delicacy of the food would awaken their taste buds in an ambience quaintly and fabulously mixed with urban sophistication and charming rusticity which can attract a variety of different patronage, ranging from urbanites to rural folks.

Needless to say, Randy’s first customers were Brenda and Betty, for they’re the best and most discriminate gourmets unafraid of honest opinions of the food they tasted based upon their excellent faculties of taste in combination with spiritual abilities to look into the hearts and souls of whoever makes the food. Surely, Randy’s crepe for Brenda and Seaweed salad for Betty were a feast they wholeheartedly enjoyed. With such delicious menu with fine culinary skills acknowledged by his most punctilious connoisseurs of food, plus a good moral character, Randy’s business success will be a logical consequence, which echoes what Ralph Waldo Emerson addressed to the audience two centuries ago as follows:

Like an ancient statue of marble,
She was sitting there alone, noble;
Like a flower soaked in crimson waters,
She was drowning deep in Rivers of Fears;
Like a fairy ogled by an eager ogre so foul,
She was seeking a niche to save her soul
Chased by terrors of the repulsive with a howl
Until she cried out loud, “Artemis! Save Me!”
Then was heard no more, seen no more, but a tree
High and solitary like a statue once sitting there.

I am awake – I know I dream not,
Making every image in seeing real
The fancy of the mind I know for aught,
Riding on a train of thoughts by a mile.

When I dream – I think myself awake,
Seeing things in fantasy of the obscured mind
Buried in the vales of decaying senses at stake,
Gliding on a Flying Carpet overlooking the world.

For my dreams are impertinent when unguided
By the consciousness of reality – Law of Reason –
Pulling the reins of Rational Truth in on the mystified,
Hunting out the causes of the Revolt against Reason.

P.S: I wrote this poem upon reading “You and Your Dream” by Thomas Hobbes (1588-1679) in which the philosopher assessed the nature of /evidence of supernatural sights and other related matters. So in a way, this is  my review on his essay, which I thought would be interpreted better in poetry based on its subject matter and the impressions it evoked.