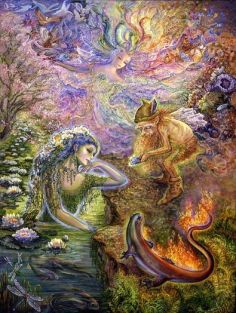 An old alchemist had assistants

Of Craft from Titania’s Kingdom

And they worked for him at nights

in return for fairy food abloom.

Salamander belched out a fire

Under the tripod holding a beaker

that grew hotter and madder;

From the well of Fairy Realm

Boiled and bubbled in the beaker

She watched with pensive calm;

As Gnome put a sorcerer’s stone

As black as the Stygian River

From the bottom of Earth alone

While Sylph was breathing Air

Into the Earth joined with the Water

And the Fire in the Craft of Wonder

Creating Gold and Elixir in Splendor.

P.S: It’s Fairy-tale Tuesday on Twitter, and this is my poesy contribution to the weekly fairy twitter feast for those of you who take a fancy to fanciful elements and dwell in the beauty of the mysterious nature.