Thunder Dog by Michael Hingson is a book of manifold genre: part memoir of a brave man who has risen above the obstacles, part an educational guide for the role of a Seeing Eye dog for the blind in our society, and part a great adventure story about two parters in action. The story of Mr. Hingson and his faithful dog Roselle is at once undeniably heartwarming  in describing how they stuck together in times of great distress and heart wrenching in unfolding prejudice that Mr. Hingson and Roselle  faced as a blind person and a service dog. 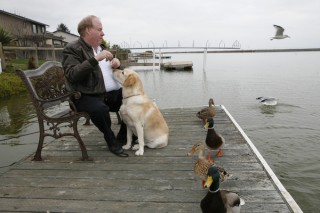 Mr. Hingson is truly someone I can look up to because despite his blindness, he did not escape from reality but always tried to do whatever he could to the extent possible among. Of course, there was a great family support who always treated him as if  he had been a sighted person. But still the author had to do all things by himself outside the safety of home, such as bicycling around  his town as a kid against the biased complaints from the neighbors who were afraid of any damages that the blind kid would cause on a bike. But Mr. Hingson did not yield to such unfair glances and kept on going. This is just one of many episodes that manifested Mr. Hingson’s resilient and brave spirit. Eventually, he graduated from university with a summa cum laude distinction and went on to become a regional manager of a company. 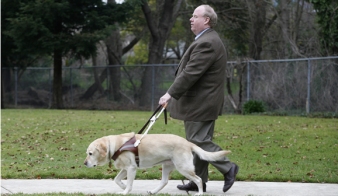 Roselle was  the author’s guide dog that stayed with Mr. Hingson at the time of 9/11 tragedy in the World Trade Center. The author narrated that Rosell was not alarmed but behaved normally even while they were evacuating from the building after it had been hit by the hijacked airplane. (The only thing that made Roselle agitated was thunder because according to the author, thunder ionized the air with the formation of ozone, which produced a distinctive smell of the weather condition unpleasant to her. ) In fact, Roselle was more of a partner to  Mr. Hingson in tackling challenges that both of them encounter ed in daily life. 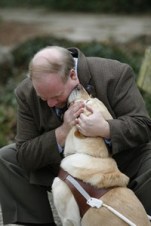 For instance, when Mr. Hingson went to a restaurant with his company, waiters/waitresses ignored his presence and instead took the orders from other people with him. As for Roselle, many stores denied her access to the premises even though she was a working service dog. Nevertheless, the duo soldiered on in fulfilling the demands placed on their daily tasks to keep their lives moving on.

Now Roselle is not here with us in this world any longer, and Mr. Hingson has a new guide dog named “Africa”. But the legacy of the brave duo as battle buddies in life still lingers in my heart. Since reading this book, I have learned that (1) there are no huge differences between the sighted and the blind in performing ordinary daily functions; (2) the blind should be treated just like our ordinary neighbors without condescending manners and biases; (3) the usual life span of a service dog is 10 years because of stress accumulated by years of sacrifice that it makes for the protection of its owner; and (4) when a handler/owner walks, he should keep his left foot by the front right paw of his dog.  Thunder Dog is a wonderful book about this incredible duo in their voyage of life together.