Hi there. Thank you for stopping by my blog. It’s always a pleasure communicating with people through writing, which I believe is the most authentic vehicle of expression of a self. My love of reading and writing inspires me to publish my thinkings in this blog. So Welcome All with my Whole Heart.

My name is Stephanie Joori Suh, living in a suburban New Jersey town in the vicinity of the New York City. I work in the City for livelihood and write at home (or sometimes on the Second Floor in a Dunkin’ Donuts’ shop nearby my workplace) for selfhood. The great psychologist and thinker Viktor E. Frankl, who is also the founder of Logotherapy, has urged us that we strive for realizing our values that are: Creative Value, Experiential Values, and Attitudinal Values in order to arrive at meanings of our lives. How true it is! I believe those who write are united spiritually in fulfilling such noble deeds. We are kindred spirits.

I may not write perfect English prose due to English being my second language. I may not sound ordinary in the sense that my writing speaks with certain streaks of foreignness. Nevertheless, it is my quest for actualizing what I possess inside by means of literary expression. And I have to purge it out, unravel the mystery in me that is dying for the discovery of the truth in me.

Hence this little blog has come into being; it is the birth of my brain child, or rather the manifested ego qua meaningfulness as in terms of Logotherapy. So many thanks again for your readership, which is also meaningful to me. 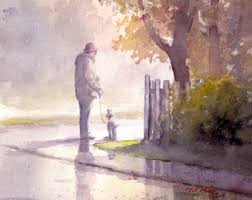 So there he was. You could always find him there at the same time, at the same place regardless of a change of four seasons, like it was his duty to do. Looking over the fence smartly seated on a rock on one balmy afternoon, Toto was calm and steady. His big brown eyes full of yearnings and visions glanced at the dancing leaves on the quince tree outside the fence where there were only a few fruits left because Grandma, being of generous and affable nature, had given the well ripe ones to the neighbors. However, such intermittently displayed quinces surrounded by the abundant leaves appealed to Toto’s inquisitive eyes: the way the leaves swayed to the tune of the breeze was a part of the nature’s orchestra that stimulated all of his senses, which ultimately led him to the outburst of his exhilaration in long howling like a wolf pup in the wild.

Toto was a Jindo mix, aged 9 weeks or so. Toto came to Joe’s home on a cold winter afternoon a year ago with Pa who brought him in his jacket. He was a white puppy looking healthy but a bit apprehensive about the new surrounding. But mind you that there was no sign of fear in his eyes but intelligence. Joe named him Toto after a legendary dog in Korea who returned to his owner, an old woman who had given the dog to her nephew in a city miles away from her home in Jindo. So he wanted to have a dog whose faithfulness and loyalty would be equivalent of those of the legendary namesake. Joe wanted to keep his new puppy till the end of the world because he had lost Lana, a Samoyed mix puppy of 9 weeks old, to distemper 2 years ago. This time, Joe thought, would be the last time to let such thing happen to him and the dog. It was his new bound duty, a duty that suddenly appeared sacred and fateful to his destiny. Boy as he was, Joe was resolute in his new pledge to the life and protection of Toto as his guardian. Looking at Toto who was napping beside him on the rock by the quince tree, Joe could hear the whisper of the breeze that blessed his guardianship and fellowship of the human and the canine. What a nice afternoon it was to both the boy and the dog.

“Joe, can you come here quickly?” It was Joe’s sister Judy. She was 16 years old, 2 years senior to him. Judy also loved Toto and dogs, although her favorite breeds were Labs, Border Collies, Shiba Inus, and Bichon Frises. She had been secretly entertained having a Bichon Frise until Pa brought Toto home. She had a soft spot for this particular breed since she had read about a homeless elderly man who sailed through the tribulations with his Bichon Frise dog named Willow; the image of the small, curly haired dog with large soulful eyes in the arms of the man still lingered in her mind. But it’s not that she did not lie their Toto. Toto was their another sibling, the youngest brother whom Ma had lost by miscarriage 6 years ago. Judy’s love of Toto was not to be confused with anthropomorphism because she loved Toto the way he was, the way Toto was the closest natural wonder. He was Judy and Joe’s guide to the natural world like Virgil to Dante in his journey to Hell, Purgatory, and Paradise. Through Toto, Judy and Joe could see the wonder of Nature in which all creatures existed and made the human existence all the more conspicuous by appreciating the pristine beauty which was to be beheld in the eyes of the innocent.