“A girl should be two things: classy and fabulous,” said Coco Chanel, Godmother of the Mods. Ditto. Hence my choice of this pretty blouse:the sleeves are coquettishly but not provocatively diaphanous with cute stand collars and pretty polka dots adorably decorated on the front and back sides of this tunic-like blouse that gives the illusion of an authentic silk blouse redolent of a muslin black dress I fell in love with from Chanel 2007 Spring Fashion Show because it looked so ethereal, so graceful, and so beautiful even in its simple design bereft of any sparkling ornaments. What’s more, this blouse is very appropriate for work, rendering both professionally sleek and fashionably chic impressions. The loveliest thing about this pretty blouse is the way it hangs on your body when you walk or even stand, especially in breeze: it sways like a willow or a cosmos on a slender reed. This sensible and fashionable blouse will look just beautiful on all women with wings of fairies and aura of mysteriousness in any setting.

Author’s Note: I love this new blouse of mine, so I had to write about it. Vain? Immodest even? Hardly ever so because even someone like Virginia Woolf , who is revered as a forerunner of feminism, admitted thus: ” Vain trifles as they seem, clothes have, they say, more important offices than to merely keep us warm. They change our view of the world and the world’s view of us.” This betokens Woolf’s indelible trait of femininity in her regard of fashion as wings of social mobility and status in society. So why not making fashion as an expression of myself in the most fabulously fashionable way? 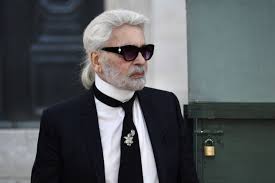 You would know him if your sense of style strikes the chords with his idea of beauty that seems a curious conflation of the ethereal with the down-to-earth. Or you would know him as a photographer whose world of beauty betrayed linear conformity in the most brilliant way. If none of the above belongs to you, then you would probably recognize him by his signature silver hair tied in the 18th-century man’s ponytail style in urban tight attire that looked strange but charismatic, decadent but conservative. In the fashion and beauty firmament, Karl Lagerfeld (1933-2019), the creative director of the French fashion house Chanel, was one of the principalities whose dazzling collection of creativity formed a legion of cult.

The death of Lagerfeld seems a bit distinguished from those of other fashion designers to me based on my purely subjective taste and reason: First of all, Lagerfeld was a very intelligent man of culture, judging by his display of erudite knowledge on art and literature due to his voracious reading of books. I saw his interview with Charlie Rose several years ago and was delighted in listening to his conversing with the host because of his intelligence and quickness that was never a bore. Also, Lagerfeld’s world of style is not far-fetched and always mixed with individual attitude that looks so cool and stylish and emulative. Although a gorgeous but exorbitant Chanel tweed jacket is like Jason’s golden fleece to me, I can take a cue from Lagerfeld’s feasible but fashionable style to make it my own in everyday life. Besides, Lagerfeld’s controversial but honest opinion on thinness as an ideal beauty chimes with mine. Call me ever so superficial, politically incorrect, or even persnickety, but the emblem of the flesh as a forced common denominator of beauty and fashion is arbitrary and despotic.

Karl Lagerfeld was the only fashion designer I admired, and his death saddened me when I learned it yesterday from this week’s issue of The Spectator. During his reign of the Chanel House, Lagerfeld used to say, “T-shirts for ten dollars are even more fashion today than expensive fashion.” Must I say more? That is why I liked and like Lagerfeld and his canon of style that is timeless and classic.