To tell a story within you is an expression of yourself, an affirmation of your identity, in an expanse of will wielded by the spirit of freedom. Storytelling is, in fact, a way of logotherapy that helps you find meaning in life from your daily tasks to your traumatic experiences by sublimating the pains of the heart to the blessings of the spirit, in the realization of Amore Feti. In this book, Anita Sethi shoehorns her experience of racism in England into a rivetingly ingenious travel memoir in the spectacle of a beautiful natural landscape where she belongs.

Her narrative has a lyrical quality with a poet’s rhythm that reminds me of a Portuguese Fado song. Her words sing her story of an uneasy love relationship with her own country into a continuous fugue of love, betrayal, loneliness, and friendship vested with her experiences with people and nature. It is at once dolorous and enchanting as if to listen to a mysteriously elusive melody hummed by a ghost of a sad maiden who died in brokenheartedness. Yet, this doesn’t mean Sethi is a ghost damsel in distress bemoaning her betrayed love. She is a warrior who chose the pen to vindicate her attacker and other minor offenders of her South Asian ethnicity as a way to overcome her fear and anxiousness, arising from her ashes like Nietzsche’s noble phoenix.

Sethi’s narrative then becomes a eulogy to the natural landscape of Great Britain; she finds an elbow room, a niche, her library of wonder. As Shakespeare pointed out, nature is exempt from public haunt, finds good in everything. It is a grand luxurious spa free of charge to all, although that is not always tainted by the malice of incivility on the part of humans. However, Sethi, in her story, asserts that no one can take away her right to belong in the beauty of nature and the country she regards as a home and proclaims her self-identity by telling her personal story incorporating the words into the images of British mountains and forests, exempting her from a malady of social ills and elevating her to the citizens of the Universe.

The book is an excellent bedtime fellow when you want something thoughtful but not burdened with elements associated with scholarly apparatuses. The narrative is flowing melodiously, and the author’s spirit is within the texts, full of emotions but nuanced in her infatuation with the beauty of British landscapes that provide her with holistic healing power. They say you don’t protect what you don’t care about, and you don’t care what you have not experienced. To appreciate the value of this book doesn’t mean you have to be of a particular ethnicity, gender, or race. As long as you have taste and judgment universal in all humans, especially with a strong sense of empathy and a lover of nature, you will find her story alluringly gripping and feel her pains and loves as if they were your own.

Sometimes the truth is so strange and mad that you wish yourself dreaming when you awake. That is what Sir Arthur Conan Doyle must have realized when he got a letter from one George Edalgi. The story read springing from Doyle’s Holmesian stories. Britain’s beloved author, partly curious and mostly indignant at the case’s stupendousness, felt responsible for searching the truth as the creator of his alter ego, Sherlock Holmes. So Doyle met the client Edalgi face to face in a hotel in January 1907. 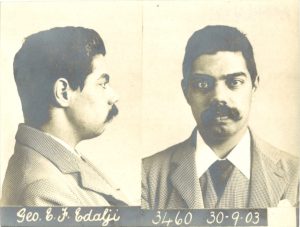 George Edalgi, the eldest son of Parsi-English vicar in the small mining village called Great Wyrley in England and former solicitor, served seven years of penitentiary servitude for the Great Wyrley killings of 1903 he claimed innocent. Edalgi’s case was an ipso facto example of miscarriage of justice on indubitably evident grounds of racially imbued personal vendettas against him and his family for who they were. The Edalgi family, despite Charlotte, the mother, and wife, being white, were regarded as heathen Indians encroaching upon the comfortable life of the English, or more precisely, the white privileges, which was the bastion of the eyes of the most villagers. Since the beginning of Reverend Edalgi’s vicarage, the family had been constant targets for racial slurs and hostility that perpetuated the peaceful family life. Even after George became a lawyer, the villagers continued to disrespect his presence, culminating in the notorious Great Wyrley killings of 1903 in which livestock, including horses and cows, were atrociously mutilated and left dead in horrible agony. As Wyrley was a closely-knit village of miners, the easy target for the blame goes for the Edalgis, especially for their eldest child George. He was a loner with distinctively ethnic physical features roving around alone in rumination on evenings. Any white person doing the same ritual would seem philosophical, sentimental, or poetic even, but it did not apply to George’s leisurely ceremony.

Upon consulting George, who must have thought Doyle as the only person on the British Isles to listen to his truth, Sherlock Holmes’s writer has the hunch that the client could not possibly have committed such an abdominal crime for the following reasons. The trappings are so fitting to a conspiracy that they stink:

Doyle’s real motivation for campaigning for George’s amnesty is curious speculation. Yet, it was the darkest night of the soul when Doyle answered the call for justice. He lost his wife Louise to tuberculosis while he was in love with Jean Leckie. Doyle took Louise’s death as a pang of his consciousness for seeing another woman at the time of her illness and regarded the letter from George as redemption of his soul to redirect the ship adrift after maelstrom. Whatever it might have been, Doyle was one of the most ardent campaigners for George’s pardoning to reinstate his legal career and restore his tainted honor. The fruition bears two tastes of the victory: the case led to the establishment of the Court of Criminal Appeal in 1907, and George was allowed to practice law again, which he did in London. However, the official government’s compensation for George’s time from the malice of injustice yielded nothing. Soon the case and the name George Edalgi became a thing of the past unless Arthur Conan Doyle chimes the bell with the forgotten.

This story I read from a British history magazine makes me think of what an author should be. An author sees the corrupt humanity and ills that cause it, stands furious with the honest minds, and speaks to the corrupt minds amid the chaotic order of nature that goes against truths. Charlotte Bronte posited that an Author has a faithful allegiance to truth and nature. Bestselling or obscure, an Author represents humanity who can see what others oversee or trivialize in preference to magnitude in power and splendor in fame. In that light, Conan Doyle deserves special homage for his search for truth. That is why he is still a great author in posterity.

Music is a universal language of humankind, as perspicaciously illustrated in a segment of the film ‘Mission’ where benevolent Jesuit missionary Gabriel plays the oboe on the top of the stiff cliff surrounded by the heathen natives. The beautiful Gabriel’s melody enters the souls of the natives, stays there in wonder, enough to disarm all hostility toward Gabriel and open their hearts. The language of music intoxicates the heart and satisfies reason and nothing more.

But that is not what it is like in this world we live in. Music is perceived as an ideological, political tool for suppressing and propagating specific ideas by persecuting the proponent of a theory that irks the majority populace, as posited in scholar John McWhorter’s article “Is music theory really #SoWhite?” The article’s gist is that two music professors at Hunter College are in a row because of their different opinions about renowned Austrian music theorist named Heinrich Schenker criticized for his openly racist views on just about everything. Schenker is long dead, but his genius in musical theory still retains magnificence among academics worldwide, including those whom Schenker might not have regarded as kindly and respectfully. One of the proponents is professor Timothy Jackson, who highly esteems Shenker’s musical theories irrespective of his personal belief and ideas.

The nemesis comes in the name of professor Phillip Ewell. He is also a cellist and half-black, attacking his peer Jackson to defend Schenker’s racist views that are an essential part of his music theories, so to speak, campaign for Jackson’s dismissal from the college the count of racism. That is not the end of Ewell’s fury against Shenker and his admirer. The arrow also shots Ludwig Von Beethoven’s bust, whom Erwell thinks doesn’t deserve the genius composer’s high appellation because the panegyrics from white supremacists ornaments his abilities.

Reading the article with the images of the dead Shenker and the two professors at tirades, so to speak, in my mind’s vision, I feel like watching an inquisition tribunal or communist party’s kangaroo court where the innocent not committed crimes regardless of his/her personal faults or weakness is savagely summoned and tried without attorney testifying the truth. The truth, said Edgar Allen Poe, is the satisfaction of reason, the fulfillment of judgment. I understand Erwell’s fury erupted in the BLM movement’s wake, which brings the suppressed matters into the light. But the accusation of Jackson as a racist that hurled him to the center of controversial debates at the expense of his livelihood because Jackson spoke for Shenker’s work as values attributable to the benefits of arts doesn’t seem to hold water. You can have a heart burning with passion with a head kept in the cold with reason.