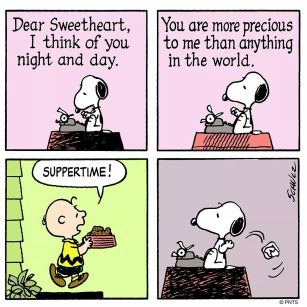 As I read a daily Snoopy comic strip on my Kindle Fire, I believe the power of pop art that shapes the patterns of our culture and the modes of attitude toward the social customs and conventions. This relatively new modern art genre first emerged in the United States and the United Kingdom in the late 1950s as a counter cultural movement to challenge the orthodox forms and formulas of fine art by using imaginary figures or cultural objects from mass demotic culture, such as comic books and advertising. Its wide appealing to all stratum of society devoid of abstruse textual message or abstract imagery only comprehensible to a select few is elegantly manifested in Peanuts, featuring Charlie Brown, his friends, and of course his very famous resident beagle Snoopy.

Peanuts is all about being hopeful in the face of hopelessness in living daily life. The round shapes and soft faces of the characters of Peanuts evoke a sense of warmth, innocence, and artlessness with a feeling of secure comfort. What’s more, the simple themes of this affable comic strip are universally translated into the minds of readers all around the world, so much so that in Japan Snoopy and the Peanut Gang have become celebrities in the stationery firmament since their first debut in 1950. Peanuts shows us the incongruity and pain of everyday human condition in the appearance of innocent-faced children and stoical Snoopy. It reveals certain truths of our daily existential dilemma in which we struggle with the meanings of life against our unknown futures. In this regard, Peanuts is a profound comic strip dealing with very adult concerns – that is to say, life is a series of worries and more worries- in disguise.

The creator of Peanuts, Charles M. Schultz (1922-2000), was in many ways a lot like Charlie Brown. Both of them had that placid, affable smiles, soft facial features that make anyone feel guilty of hollering out their names out of earshot, and relaxed and almost self-effacing comportment that spells out “Humility.” In fact, the shy Schultz found the best medium in a comic strip to express his artistic talent and intelligence and thus created his simple but complex alter ego Charlie Brown. However, Schultz did not purport his creation to be a medium of pontificating about political or social agendas. He did not intend to use Peanuts as a visual aide to contextualize far-fetched psychoanalysis in this comic strip. The triumph of Peanuts over the flight of ages and gaps of cultures lies on Schultz’s keen observation of life per se and his effortless delineation thereof in this quiet but smashing timeless comic strip that deserves of universal recognition across the seas and continents. For this reason, Peanuts is an excellent paradigm of pop art whose excellence is simplicity in character, in style, and in form. Leo Tolstoy said, “There is no greatness where there is no simplicity, goodness and truth.” Peanuts fits all of this.