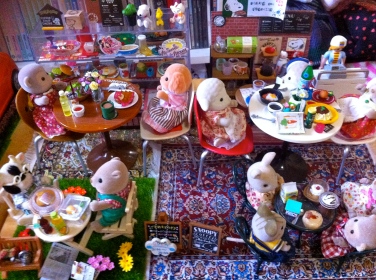 A new cafe is opened in Avonlea. “Snoopy Cafe” is the name of the venue selected by Ms. Katherine Cookson, the propriteriotess of great culinary skills and business acumen originally from Dublin, Ireland. Before opening up Snoopy Cafe, Ms. Cookson used to work as a head manageress at a popular pub called, “Irish Spring” in New York City for thirty good years. With her lifetime saving and investment from stocks she has sagaciously sold when the market trend was very favorable to her, Ms. Cookson was able to start her own business in her own accord. And voila! Since the opening of the cafe two weeks ago, it has been bustling with virtually all the residents of the town as well as customers from the neighboring cities who have become her regular customers hooked on her savory food made on premises on a daily basis served at affordable prices ranging from $6.50 to $20.00 for lunch and dinner menus.

The cafe is needless to say what a cafe should be like in terms of the quality of food it serves to customers at prices that do not break their banks and its atmosphere; i.e., whether it has a pleasant, comfy ambience that attracts both  sensitive souls who delve into reading and writing with coffee or tea and gregarious spirits who like to confabulate with their ilks or friends on things interesting to them.  That is to say, Snoopy Cafe can become your elbow room during lunchtime out of the stuffy offices to refresh your minds or at dinnertime when you want to stop by to compose your stress-overwhelmed spirits, or to meet with your select few to get together.

Sally has become one of the regular customers of Snoopy Cafe since the last Monday lunchtime when she accidently found out the existence of this new cafe; actually she had heard about it through the grapevine at the office, but never bothered to try it on her own because being painfully shy and a habit of creature, she had no auspicious audacity to go there by herself and check it out. Then – maybe it’s because of the beautiful weather or her acquisition of a new ipad her aunt Mary had bought for her that emboldened her caged spirit- at one Monday lunchtime, Sally finally recognized the store sign of the cafe while waiting for a green light to cross the street. “So there is that popular cafe… Maybe I can try it today.” So the history of her elbow room has begun. 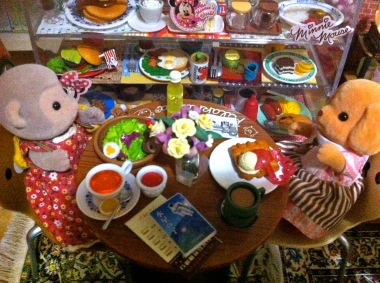 Aura Magoo whose husband owns and operates a seven-eleven type of convenient store nearby stops by at the cafe with her new friend Bonnie Poodle, who is opening a new French bistro at the end of the month with the trust fund bequeathed to her by her deceased paternal grandmother in France.So Bonnie wants to share her excitement for her impending new entrepreneurship for the first time. Aura, the prettiest lady in the town, is in fact secretly jealousy of Bonnie’s financial and social independence as a single woman because she has to rely on her husband’s (named Zeus) monthly allowances to her for tending household and other expenses.  Of course, she would not manifest her true feelings on the outside because she accepts it as a fact of life which she has to bear  with smile, now that she has married with three children named “Apollo, Artemis “Mina”, and Hercules “Herk.” All this complex of emotions and feelings while having a bowl of veggie salad and listening to Bonni’s rhapsodizing about her imminent business enterprise is on the brink of manifestation on Aura’s pretty face, but she manages to quell it by forcing herself to turn to the delicacy of the salad with a cup of red tea, her favorite cup of tea.

Mary is taking a repose from her popcorn operation, opting for a Lunchtime Pick-Me-Up Sundae at the prices of $3.00 as a lunch special, instead of a meal set. Mary has a sweet teeth and loves to appreciate quality sweets regardless of calories, for calculation of calories at every eating time is thought ridiculously fastidious to her. After all, every edible element has calories, and just because you live on greens or proteins, it does not guarantee you optimal health, let alone svelte body. As one of the ancient epithets inscribed on the wall of the Oracle of Delphi, “Nothing in Excess” should be Rosetta Key to healthy body, beautiful body, and sound mind. In other words, if you do everything you do in moderation, you will never be led astray. 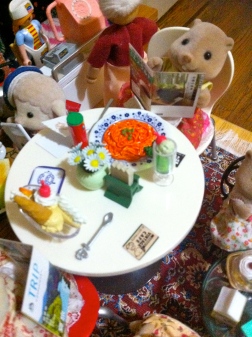 While having her afternoon pick-me-up, Mary is joined by Brenda Beaver, wife of Randy Beaver, who has just lost a job as a head mechanic at “Troika Auto Body Shop” in the city as the shop went bankrupt three months ago. Thanks to his long years with the shop over ten years, Randy has been receiving his unemployment benefits that go straight to this household which has also been supported by Brenda’s income earned from her cleaning service on request. Randy has been thinking about his and his family’s future seriously but doesn’t let it shown lest he should lose confidence and hope. But his wife Brenda knows it all and understands his pathos, so she acts like she does not know any trouble in the world to keep up with Randy’s confidence as well as hers, for they have Betty and Billy, their apples of the eyes. Since Mary knows Brenda’s present family circumstances, she treats her with a swell luch of homemade-style spaghetti, one of many Mrs. Cook’s signature dishes.

Snoopy Cafe  latently serves as an agit in which you can read and write however long you may like without ordering any more than what you want – say, a cup of black coffee or tea only – amid Baroque or Classical music or Pop-Classic music, such as any piano pieces of much written and played by Richard  Clayderman. Viewed in this light, Snoopy Cafe is meant to be a niche for any timid soul wandering desperately to rest the weary soul with good lite food just to refresh the soul for the other half of the day to make it a grand finale. Moreover, there are no vagrants importuning to patrons of the cafe, menacing money  with offish attitudes in uncivilized manners, for even though tramps are not to be despised, neither are their present abject conditions, such depravity does not/should not confer on them right of rudeness, incivility, and solicitation without a sense of civil obedience and societal codes of conducts that are essential to be citizens with money or not, all of which is overlooked for the sake of liberal/libertine ideology that gives no regard for societal values so crucial to the communal life. And all of the customers of the cafe want to keep their new elbow rooms untainted by such political ideology that does not care for the importance of civility in the name of equality.