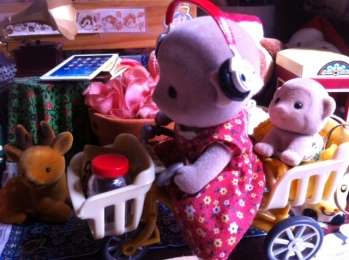 It’s a dewy one Saturday morning after the nightly rain that cooled off the fiery flame of the sun. Thanks to the abundance of flora in Avonlea, the process of transpiration by which leaves of plants release moisture  into the air that results in rain on earth, the land of Avonlea is hardly parched, and the atmosphere always fresh and fragrant. That is why Helen induced her husband Priam to move to Avonlea a year ago from Roanoke, where humidity and mosquitoes ruled in autocracy; it was an unsavory place to live, let alone to start a family. The rumor had it that the nondescript town was later set ablaze and ravaged by a man driven to madness by such a torid ambience of the toil. In the background of all this, Helen cannot be happier than now, while listening to one of her repertoires, “Downtown” by Petula Clark on her iphone. In fact, she feels as if she and her George were flitting on her aerial bicycle in the blue sky.

Meanwhile, Sally and Bonnie are cooing Alfred, a  baby son of their neighbors Mr. and Mrs. Redfox who are on holiday  to Prince Edward Island. Their vivacious daughter Judy is at a parochial summer camp in Thousand Silvers. The Redfoxes are scheduled to return home tomorrow afternoon, so it’s not too much of onerous task the two ladies have to tackle, straining themselves over how to pacify a crying baby, what to do in case he becomes sick out of the blue, and when to change his diapers, etc. Fortunately, Alfred is so mildly-tempered and easy to take care of in the bargain that it is actually a pleasure attending to the toddler without feeling stressful. Sally ponders if such equilibrium in temperament would be a manifestation of solidification of genetic composition. In a minute, Sally and Bonnie are going to take Alfred out for their usual morning promenade.

“Look, Bonnie. Alfred’s got a cute mole on the right cleft of his lips! So adorable! I wish I had it too!” “Let me see. Hmmm… I had not noticed it until you told me so. Don’t you know that his sister Judy’s got the same mole on the left cleft of her lips? And so does Mr. Redfox? It seems to be a genetic trait of the family. Definitely. Funny that a man like him has got it, while his wife has dimples. But then the dimples are more precious and feminine and more desirable than a mole, no?” In fact, Bonnie secretly wishes that she would have the same attractive dimples around the corners of her lips that would make her face prettier and perkier. But it is just one of those innocent, muliebral wishes of  a lady who doesn’t think that she’s pretty enough to be wooed and sought after. But then who can blame Bonnie for vanity when a gentleman likes a pretty lady? But let us put all the convoluted thoughts and tangled emotions and untamed emotions aside for this bright Saturday fragrant with fresh petrichor. Forget all the worries just for Today and Tomorrow, which is Official Holy Rest Day, and let’s just pretend to have million dollars in our bank accounts for the weekend.