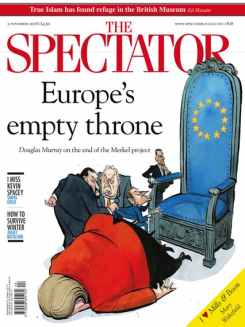 Although I try not to read a newspaper on a daily basis because it is always fraught with starkly existential horrors of life that rudely bestride a secret garden of my sanity like a herd of barbarians in the ancient forest, I enjoy reading a selection of magazines filled with well-written articles of interesting topics aiming to educate us, the citizens of the world, on the state of affairs around us in order that we may formulate our own views of the world based on the acquisition of the knowledge. In this regard, this historically and intelligently renowned magazine The Spectator epitomizes literary journalism in the most scintillating way that makes reading a magazine at once an enlightening and entertaining experience.

Established in 1828 (but its actual genesis began way back in 1711 by Addison & Steele.), this magazine is packed full of current affairs, reviews of the Arts, essays, and many more that will pique your attention; they are also surprisingly easy to read without the usual journalistic lingo chockablock with gobbledygook, priggish literary expressions, and biased opinions that are common features of magazines of the similar kind.

My Caveat emptor for The Spectator is thus: because of its political and cultural leaning toward conservatism, many of the first time readers might feel guarded to hold their due admiration of the fine quality of writing laced with the characteristic British witticism. But don’t let it deter you from enjoying this cracking compendium of our today’s world in a wonderfully intelligent kaleidoscope, which is a truly one-of-a-kind. This magazine provides to you all the knowledge with information rarely found in any other popular contemporary periodicals, especially here in the States where the majority of them are proudly anti-establishment, anti-tradition, and just about all anti-anything civility without meritorious writing styles laced with scintillating witticism that was once wielded by the pens of Mark Twain, Horace Greeley, and Roger Ebert.

All in all, in reflection of Benjamin Franklin’s timeless sage adage “An investment in knowledge pays the best interest,” it is worth the subscribing to The Spectator. And if you have a Kindle Fire like I do, you will be looking forward to receiving and reading it every week with a kind of expectation you would rarely get from reading just another lackluster periodical.

P.S. This overview of the magazine was written in response to an email sent by Amazon asking for my customary opinion on it. Hence this review.