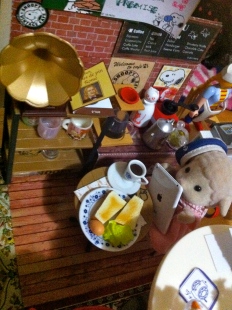 Sally was enjoying alone at Baroque her respite from the demands placed upon her weekly tasks and responsibilities at her new job. Baroque is a newly opened coffee house where her best friend Bonnie is both a manager and attendant, provisioning customers with delicious pastries, cookies, freshly-brewed coffee and exquisitely beautiful Baroque music composed by Bach, Handel, Pachelbel, Vivaldi, et al. at the behest of her aunt Laura, who is the proprietress of the establishment. It is all the more fitting to Sally’s musical taste and sensibilities. Which is why she has made it her elbow room where she can rest herself reading and writing enveloped in an atmospheric ambience of highly sophisticated cultural surrounding rare to find these days.

Sally likes the delicateness of the Baroque (which means an irregular shape of pearls in Portuguese) music, especially the works of Bach and Handel, the Father and the Mother of Music, or Saints of Music. It’s all in the family blood: her father was an admirer of Bach and felt exalted when listening to Brandenburg Concerto No. 3 In G Major, BWV 1048: Allegro. He might have been wanting of the practical sense of the world or the “gumption,” but his eminent scholarship of the Arts and Humanities was his essence, his primary reality. That’s the legacy of eclectic cultural taste and erudition Sally has extolled and preserved against the struggles of life in which she always tries to grasp on a sense of social and cultural superiority, while guiding her elderly parents on the long taxing climb to financial security. Here in this Sunday morning, Sally’s spirit was flitting in the celestial garden alone, while indulging herself in listening to The Arrival of the Queen of Sheba by Handel. In fact, it’s her favorite musical piece in the world, her primary soundtrack of life, her sui generis leitmotif  that is hers, hers only, hers exclusively.

Bonnie was smiling at her friend Sally’s intoxication with the music outwardly manifested on her pretty face in the form of dreamy look with her eyes closed as if she were watching musicians playing it on stage just for her. That’s one of the reasons Bonnie likes her friend: Sally’s artlessness unsullied by her intelligent prowess makes her trustful, beautiful, and soulful. When Sally opened her eyes, she smiled at Bonnie and started piping up: “You know Bonnie, I love this music so much that all my grief, angst, and trifles desiccate, then die… It’s very vivacious and and jubilant, uplifting my otherwise somber mood to make me believe that the world isn’t that such a bad place to live.” Sally’s eyes becoming sparkling with verve and her cheeks flushed with rose pink, all because of the love of the music. And her rhapsody of love began as follows:

The Arrival of the Queen of Sheba is a sinfonia for two oboes and strings written by George Frideric Handel, originally from Germany but later moved to England for advancement of his musical career. By the way his father was an eminent barber-surgeon as it was customary for a barber to work sideline as a dentist and surgeon. That’s a bit odd, isn’t it? Anyway, the music was first premiered in London as the first scene of Act III in the oratorio Solomon. But rather than the whole oratorio, this brightly charming interlude has been widely appreciated as a separate set piece because it’s so appealing to the senses, I presume. Besides, the piece was widely played during wedding ceremonies into the bargain! Come to think of it, it is such a vivacious melody apposite to an entrance of a beautiful bride into a church. You know,  like the beautiful regal queen of Sheba arriving at Jerusalem with a grand entourage, with camels carrying a munificent largess, a resplendent panoply of magnificent treasure!” 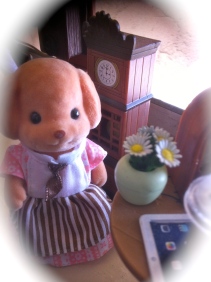 While listening to Sally’s lecture on Handel and the sinfonia, Bonnie was envisioning in her mind’s eye a scene in which she as a chaste and beautiful bride in wedding gown like a valley in a vale was entering a cathedral to proceed to the altar where her gallant husband was waiting… That’s a nice change of mundane scenery of life, Bonnie thought. Ah, the power of the music is so irresistibly masculine and impossibly arresting that the only way you can escape from its fatally sensuous intoxication is to yield to it. It’s all because of the magic of music, moody food that is bartered for love. The Bard knew it as well: “In sweet music is such art: killing care and grief of heart fall asleep, or hearing die.”