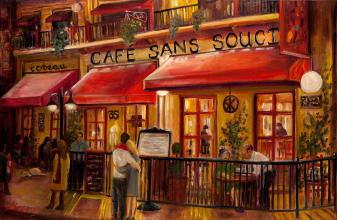 ‘Everyone else is doing it, so why can’t I?’ Iris, the interrupted woman whose inverted elitism outed her of the quotidian pleasure, was finally on the verge of private rebellion against the lofty isolation from the world that beckoned her yonder with an alluring panoply of all things sensuous, tactile and visceral, like the tempting fruit from the tree of knowledge. The more she thought about the mysterious man’s Byronic face with Olympian physique, the stronger the flame of her heart grew. It’s really a foolish heart, thought Iris, but when she had no other than a woman’s reason and thought him so, who could berate her? Call it the affair of the heart or whimsical infatuation of the beauty that looked so patrician, so elated, and so untouchable. Yet, her heart was telling her that this time she should surrender to the power of the human nature by letting the force of desire besiege her solitary castle and infiltrate it in all corners without mercy of the inter-cultural code of ethics built on the puritanical dictatorship of the body and the soul.

Consumed in the flame of passion, the soul of Iris was in communion with that of Dido, who loved Aeneas more than he loved her. Poor Dido- She deserved a better man who could return her love, for she was beautiful inside and out. Silly Dido- She should have moved on even after her lover deserted her for the glory of his predestined royalty in a new land. Dido was a woman of passion, and so was Iris. They lived on the idea of love and must have figures of love, for that’s what gave them perks of life. But at least, Dido had Aeneas, and her love was consummated in the cave on a stormy day, albeit it was all staged by Venus, the goddess of love and the mother of Aeneas, and Juno, the ever-jealous goddess. Dido’s love was actualized even for a short period of time when she was alone together with Aeneas. Alas! Poor Iris, I knew her, my dear readers. It all seems to me now that Cupid’s arrows took aims at her, but not the figure of her love. Her love was alone, her existence was always invisible, and she was not allowed the joy of love. Iris was dissociated from a parliament of Love, a congress of lovers.

It was said that the idea of love to the classical Athenians was primarily erotic, rather than platonic, instinctual rather than spiritual, physical rather than mental. What we now understand about love was no more than a close bond between family members or a master and a horse or a dog. What Iris was feeling now was a combined love of Eros and Agape. She wanted the wholesomeness of love, as in the union of Cupid and Psyche. People would think that she was disinterested in love because of her beautiful but austere look that prevented people from being jovial with her. She never told her love to anyone but let concealment feed on her damask cheeks. She pined in thought with a green and yellow melancholy with solitude as her steady companion.