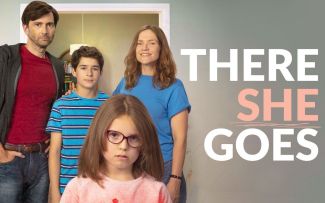 Although I am not a parent, I know that parenting is a grand task constant of every age. The ancient Greeks thought that to rear children was a hazardous undertaking and success was won though struggle. In this respect, parenting -like all other our human vicissitudes that life presents to us – can be something of an odyssey packed full of both foreseeable and unforeseeable events tinged with laughs and sighs sailing through thick fogs of uncertainty of the future but with silver-lined clouds of hope for tomorrows. A family is in the vessel of life’s voyage, and they are in for the adventure together as in the Yates of “There She Goes”.

This drama evolves around Rosie Yates, a nine-year old learning-disabled daughter of Emily and Simon and her bright older brother Ben. Rosie is a beautiful girl in appearance, but she still wears a diaper and needs her parents’ help in all things she wants to do, ranging from going to a park to eating pastas, to wearing her clothes, and to combing her hair. Her intention of the will is expressed by raw emotions of crying, shrieking, lying down on a floor (even in public) and laughing. To be brutally honest, Rosie is unbelievably uncontrollable and patently outrageous in her unbridled behaviors as symptoms of chromosomal disorder. Looking at Rosie’s outbursts of frustration, I recollected the image of wild Helen Keller before she met Ms. Sullivan. I could not help but think throughout the whole series of the drama thus: ‘What if Rosie got a teacher like Ms. Sullivan? The Yates were of a middle-class family, and there must be a way Rosie could be like Helen Keller in order that she will be independent of her family’s twenty-four-hour vigilance. It will be beneficent  to both herself and her family.’  But then my wish would be father to the thought because the Yates would not seem to entrust the care of Rosie to any one outside her family.

The drama is based on the real-life experiences of creator Shaun Pye to whom I applaud to the very echo for all that she has taken to raise her daughter. And I also feel for her husband brilliantly played by David Tennent who at first did not want to accept the truth of Rosie’s disability but later turned to be a loving father. In fact, Tennent’s performance excels in portraying a neurotic-looking father who has doubts about Rosie’s betterment but has no doubt about his love of her, his wife, and their son. He does it without a shred of overaction or hyperventilating emotions, which renders the drama a sense of verisimilitude. Parents or not, married or single, this drama shows the truthful and honest portrayal of family on a life’s odyssey bound by love and understanding and patience. If you like a simple drama that portrays the life of ordinary folks without perfect teeth and great hair but with a good storyline and elliptical scripts, this is worth watching.