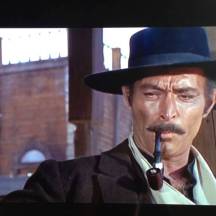 Whistle, and he’ll come to you

From a wild haze of desert maze

On his steed with the blue gaze

Into the windows of your heart

Sealed against pillage of the cabinet

For Blondie is The Good doing it.

Watch, and he’ll stand behind you

In a soldier’s hide with a golden watch

Grinning with the blue lamps that glow

Penetrating the bastion of your spirit

Guarded in the deep forest of your mind

Against a carnage of the spirit with a feat.

For Angel Eyes is the Bad doing it.

Wait, and he’ll show you

In a gringo’s hide with a squint eye

Calling you, “My friend!”, following you

Wherever you go, even to a valley

Laced with tombs of the drifters and solders

Where the dollars are paid for the tribute

To the litany of woes and more woes.

For Tuco is the Ugly doing it.

Author’s Note: This is based on my viewing of “The Good, the Bad and the Ugly” directed by the great Sergio Leone. The film often referred to as the masterpiece of Spaghetti Western, is in fact far superior to any other western movies made by Americans in terms of storyline, plots, settings, and cinematography.

For example, in this film, all of the characters are morally ambiguous and ethically challenging, which makes them realistic and relatable. Besides, compared to the perfected appearance of typical “American” characters, the Good, the Bad and the Ugly are all scruffy-looking and unhygienic even, and yet they all look quite stylish in their naturally rugged ambiance and masculine outlooks, especially well manifested by the iconic piercing gaze of Clint Eastwood as the Good and the amazingly chiseled face of Lee Van Clef as the Bad. What’s more, even though director Leone had never been to the States before making the film, he was excellent in portraying the Wild American West during the Civil War by filming it entirely in Spain.

The music by Ennio Morricone also plays an integral part in this film, creating timbres for each of the characters, so that whenever the character appears on the screen, the unique thematic music is played, indicating the moods of the characters without having them narrated in words. Hence I wanted to write about the impression of this unforgettable film that’s engraved in my Hall of Fames.