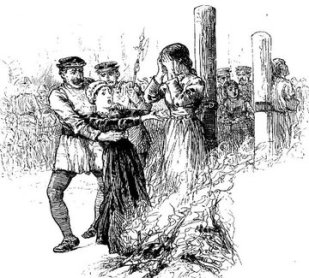 “The concept of witchcraft as devil-worship by the church unleashed authoritarian control, & the denigration of women, many of whom were burnt at the stake, drowned, etc., simply for growing herbs or liking cats! For me, these are heroines & warriors.”

I happened on the above-quoted tweet, which impelled me to unravel in me a thread of complex feelings about a common popular conception of witchcraft as institutionalized persecution of women of unique professions and different opinions and canozing them as martyrs of Feminism or Paganism.

First of all, it wasn’t just that iconic ‘Men v. Women’ or ‘Christianity v. Paganism’ facade that dominated the thematics of witchcraft. Of course, religion played an important role in enforcing the authority of the church as the one absolute administrator of justice and punishing anyone who dared to defy it. However, when the Church itself incorporated paganistic esoterism in its rites of ceremony and mechanical device of prayer, it cared less about the divinity of a pagan deity that the cult worshipped, unless it openly threatened the dogmatic foundation of the teaching of the Church. Rather, it was more of a societal practice of giving a tight rein in communal harmony that allowed no misfits or outsiders or recluses. It was grudge-filled, insular-minded, and jealousy-driven vendetta against whom you wouldn’t particularly like or whom you would harbor a kind of animosity because the targeted subject looked unpleasing, unprepossessing, or simply ugly of introverted disposition.

Women were the worse. Forget Community of Sisterhood. The Daughters of Eve can be both ecstatically passionate and formidably vengeful. A single unmarried woman, both young and old, living in the bliss of solitude, minding her own business away from the vociferous melee that she didn’t feel related was likely to be a lamb savagely herded by the hateful melee to the inquisitional slaughterhouse. Modus vivendi of social norms was the armor that would protect her from the arrows and spears of the public attack on sovereign individuality that we take for granted in our time.

Witchcraft is neither synonymous with Feminism nor Liberalism, both of which as proverbial party ideology have beocme the dogmatic foundations of Arts and Huaminities. It’s not a grand unified campaign against smart women with peculiar religious belief when you contemplate the fact that greatness results from simplicity, which is the answer to all complexities. The inquisition of popular sentiment in practice overrides freedom of individuals asserted in theory. Albert Einstein knew exactly about the dualistic nature of humanity that would return to the basic animalistic instinct such as persecuting the innocent because of their individuality: “Two things are infinite: the universe and human stupidity; and I’m not sure about the universe!” For this reason, I dare to defy the notion that the persecution of witchcraft was synonymous with the denigration of women in general.