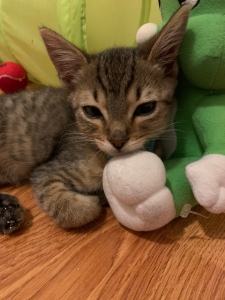 I am a dog person. I like their playful innocence and adorable artlessness. And I still believe all dogs go to heaven because of their innate goodness that brings joy to our overtly complexed human life. Also, dogs and humans have been living together for about 15,000 years as family members. Remember Argos, the loyal dog of Odyssey, who was the only one who recognized his old master in rags and tatters? Also, there were the dogs who saved the lives of soldiers during historical manmade wars in the expanse of their own lives. So, if the circumstances give me the green light, I would love to have a dog at home. Who wouldn’t anyway?

Then, given the express affection toward the canine race, how could my living with a cat be explained? The truth is still a mystery as  I still can’t believe I have Toro, an 11-week old male tabby I adopted from a shelter two weeks ago, at home with me all the time except when I am at work. Toro, which is a masculine form of ‘Tora”, meaning a tiger in Japanese, is a curious paradox of a beast; he is a little cutie with lovely big green eyes but shows all the characteristics of a predator just like his wild cousins. Toro shows he will grow into a formidable hunter contrary to his small and thin body with acute audibility and olfaction. Watching Toro playing with toys and the frills at the bottom of my skirts fluttering underneath the chairs, I wonder if Toro will turn out to be a Gremlin one day when I wake up in the morning. But his cuteness dominates fear, and he likes to sit on my laps when he feels like it. Toro seems to have crafted Ovid’s the Art of Love with innately feline caprice and whims turning it into an irresistible magic spell. What a kitty.

Toro and I moved from the pastoral Ventura County to the heart of Los Angeles during the inferno heatwave of the labor weekend. We both suffered a sense of vertigo in new urban surroundings and a little bit quizzical about how we should adopt to smaller spaces in an apartment. Maybe Toro doesn’t like our new den because he does not wake me up by climbing on my back and meowing in the morning any longer. Besides, he seems to suddenly develop attention deficiency by frequently stalking, jumping, scratching, and biting. Worse still, Toro hissed a lot and aloud for the last two days. Although I force myself to think that it’s due to the diabolical heatwave, I cannot stitch up a little hole in my heart to the immaculate condition.

Freud said the time spent with cats is never wasted. I want to believe it even if these days I spend most of the time tending Toro, instead of reading and writing. Certainly, unconditional love toward a living thing is noble and esteemed. Yet the Bard sums my state of mind thus: “Love sought is good but love unsought is better.” Still, there is a long way ahead of us to live according to the natures of our different species. Our inclinations are contralateral as our needs are egotistical for our own ends of the survival of the species. If so, then let it be – with pleasure.

Maybe, I am more feline than my kitten. Who knows? Meow.