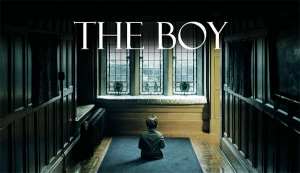 Invitation, Manifestation, and Escape are typical acts in horror movies from ‘The Exorcist’ to ‘The Changeling’ and to ‘The Others’, all of which are supreme ones of the genre, demonstrating the genuine scare is without a masked slasher on a killing spree that seems to revive forever like a Phoenix. But what about ‘The Boy’ (2016)? The movie is a lackluster flick, a smart apprentice of the masters mentioned above but without depth and breadth of knowledge of the essence of things, natural and supernatural.

It follows a young American woman with a past named Greta (very German or Grimm maybe?) hired by the overtly strange elderly couple as a nanny to their little son Brahms (possibly Bram Stoker?), a porcelain doll. As in Kubler-Ross’s Stages of Death, she shocks and denies, then accepts that she is a nanny to the doll. Of course, pretty Greta is not lonely because a young, good-looking grocer named Malcolm courts her as politely suavely as an English can be. Then Greta’s ex-lover Cole, who is the epitome of big, rough, and domineering man, suddenly manifesting from America in the English mansion, demanding she should leave for the states in the morning with him. And that’s not the end, for we are rudely introduced by a third character (or the same?), and the stupendousness of the story swivels in the flashes of screams, blood, tears, etc.

Watching this movie last night on Netflix made me think that the classic horrors of the 70s and 80s were indeed long gone and would not revive – at least for now. What begins as a classic supernatural story ends as a tepid escapade from one big mess. Greta’s coming to England is loosely explained, not to mention Cole’s sudden appearance in the English countryside manor is abruptly shoehorned into the story, breaking the thread of subplots, changing the atmosphere of the movie into a thriller that is not supernatural at all. Nevertheless, Lauren Cohan’s performance as Greta is commendable for her naturalness and arduousness in portraying her role that is the only gem of the movie that makes it watchable without turning it off.

Maybe I am either anachronistic or fastidious in selecting horror movies because of my propensity for subtle but incredible supernatural thematic elements without monsters, deformed humans, or amorous lovers. So be it. It’s all about how a story is intelligently and entertainingly told on the screen with minimum special effects, gore scenes, love scenes staging in either big swanky English country houses or big deserted mansions that are conveniently used as thematic elements. Reading the background information on this movie, I have noticed that there are quite a few production companies involved in making it. Would it be the reason for turning this otherwise excellent thematic element into a dull child’s play? Did all the companies know a thing about a movie not in monetary terms but art for art’s sake? I wonder.