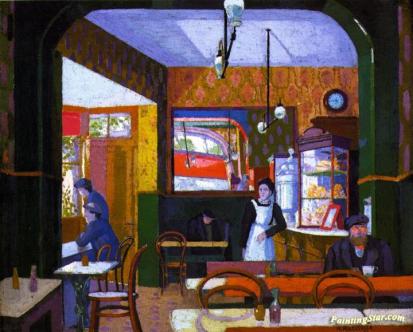 There’s nothing like a cup of freshly brewed hot black coffee in the morning to start a day. So much so that the Father of Music Johann Sebastian Bach even wrote “The Coffee Cantata” and announced: “Without a cup of hot coffee in the morning, I am like a roast goat.” It also reveals us the following historicity: (1) coffee had already established itself as a popular refreshing beverage in domestic as well as social firmament; and (2) the standard of taste as regards the principle of sentiment is universal in humankind beyond a divide of times and places. What a sense of connectivity to those living in the days of yore it is by the love of coffee!

The ubiquitous presence of Starbucks all over the world may be an cultural artifact of the 21st Century, signifying sleek urbaneness sometimes translated as being “uber cool,” belonging to our own time only. That is to say, anything out of different times is regarded as anachronistic, crude, or primitive if the divide of time gets bigger, whereas the counts of years on an evolutionary scale amounts to a microsecond on a twenty-four hour clock. Such example is illustrated in the diary of Samuel Pepys, an interesting English diarist who recorded the details of the 17th century everyday London life with wits and gusto that strikes the chords with the modern readers. Pepys commented on how he was being hooked on coffee until the inordinate consumption of the liquid caffeine made him feel sick. In fact, coffee shops are not the advent of our Internet Age. The first coffee shop in London was established in Oxford in 1652 with the proliferation of subsequent coffee houses where men of education and literary proclivities discussed business and social affairs. Beyond the British Isles into the grand continent of Europe across the Channel, coffee houses were burgeoning with artistic scenes in which musicians, writers, and painters commandeered their most favorite seats to proclaim them as their elbow rooms.

Pitchforked forward in time, I am back at my regular Starbucks store, sitting at my favorite table with pen to paper writing this essay. I look around and see people in modern attire but doing essentially same as their ancestors in a coffee house in days of yore: conversing, reading, and writing with coffee that seem to relax the constraints of everyday life in their respite. The whole scene brings me back to universal truth that something never changes, and that is what continues the humankind – through the love of coffee, as it were.

It was still early when she got to downtown. And it was still an hour early before her day at the office was to start. That feeling of earliness needed to be indulged by the leisure of solitary coffee time at her regular coffeehouse that had lovely outside seating where you could enjoy a capricious respite with a cup of coffee and watch the swing of things, the world in motion, and the parade of the human race. That time was precious time for Julie, and it was to be observed religiously  in a way the Vestal Virgins guarded the sacred fire in the temple lest it should die out, as that would mean the peril of the Eternal City. The aroma of freshly brewed hazelnut coffee could do so many wonders, and one of them is vitalizing your listless, half-awaken stupor under which you would find yourself an unconscious somnambulist or a peevish whiner. This rhapsody of morning coffee is also testified by a testimonial of Johann Sebastian Bach, the father of Baroque music, who described himself as a “roast goat” without having a cup of sensuously aromatic coffee in the morning.

Julie, as a faithful myrmidon of the power of wonder beverage, got her first morning hazelnut coffee and placed herself in the corner of her regular coffeeshop to set her cognitive functionality for a work day in motion by reading her subscription on Kindle Fire and writing down some notes from the reading. In fact, there was a set of rules of reading Julie adhered to: reading hardcopies on her commuter train and Kindle in coffee-shops because she found such modus operandi of reading quite congenital to her mental exercise. So there she was, doing what she always did, unless otherwise there was anything else that called for her urgent attention to attend before her work hours began. Then when her silver pocket watch indicated twenty minutes to nine, Julie headed for the office. That was how Julie began her normal work days. That was how she began to live another existential everyday.

That particular morning, which was Friday, was a lucky one, for no exigency was awaiting for her to execute first thing in the morning. Julie was a legal assistant at a litigation firm, where a myriad of pleadings, discoveries, settlements, and confrontations were norms of the trade. And it had been only a week since a happy chance placed her into the position offered by goddess Fortuna, who had finally countenanced her new future on the frontier. Yes, it was a frontier, a new land of unyielding dreams, high hopes, and exciting desires that Julie had felt deprived of in that grey, grim land by the Atlantic Ocean. Even Henry David Thoreau attested such tenebrous somberness of the ocean as a Sea of the Old Habits and Constraints that bound people in the Memory of their aborted wishes and crushed ambitions and encouraged them to migrate to the Elysian Fields by the Pacific Ocean, which he romantically compared to the River of Lethe in his poetic pathos. Reader, you might think it as a humbug or even a jest in your most postmodern mode of thinking in the ethos of textual parallax thriving on non-platform media. But when you become known that our life is still woven by the Fates under the supervision of Fortuna and that you are made of spirit, fire, and dew, you will swivel your head in wonderment in recognition of Thoreau’s poetic perspective on the Exodus to a New Land where nature is all the more conspicuous by the relative absence of the Gothic skyline that rudely dominates the vault of heaven on the Other Side of the Continent. Julie knew it all, and that was why she wanted to start anew in the West, where the Lethe of the Pacific flew, where the rugged hills and primitive mountains setting against the deep blue ocean still maintained the rustic charm of a village maiden.

Onward: How Starbucks Fought for Its Life without Losing Its Soul by Howard Schultz

It was eight years after the founder of Starbucks Howard Schultz had resigned from the position of CEO when the company that he had sown with the wind and reaped in whirlwind was at stake amid the catalytic financial crisis in 2008. The perilous state of Starbucks called for its creator’s return to take the helm of a distressed ship on the verge of sinking into the abyss of obscurity with all its hopeful expectations, respectful achievements, not to speak of all of its shipmates from the management down to the store employees. Schultz could not let all of it happen. He accepted the calling in the capacity of CEO to save the ship and continued sailing onward, which forms the basis of this book.

What might be considered as an autobiography of a business tycoon at first blush of the title of the book will lead the reader to an interesting peek-a-boo of a successful enterprise that is armed to the teeth with its unique philosophy of practicality and idealism rooted in operational rigor and accountability striving for a healthy balance of profit and social conscience to provide customers with prime quality coffee proprietary to the brand. Schultz’s ambition to perfect the art of making fine espresso as the company’s distinguishing attitudinal value of coffee-making from the competitors is akin to that of craftsmanship of a seasoned artisan of a medieval guild. For example, in the afternoon of one Tuesday in February 2008, Schultz closed all of the US stores to improve the making of espresso because pouring espresso was something of an art, and therefore required a barista to attend to the quality of the beverage even though it meant the huge loss of profits for closing the stores just for one day. To Schultz, taking the ordinary to elevate it to an art also relates to a business principle of putting the sincerest endeavors to the foundation and innovation of the company; it is a right way to win as he believes, “Coffee can’t lie,” which is also reminiscent of what Theodore Roosevelt commented on his favorite coffee as being “good to the last drop.”

In addition, Schultz offers many more interesting tidbits of the company without disclosing its trade secrets in an informative way: That Starbucks is company-owned and not franchised is something new to learn. Unlike William Rosenberg, the founder of Dunkin’ Donuts, who was a fervent believer of a franchise, Schultz adamantly opposes the idea of franchising Starbucks because ceding ownership of stores to individuals will most likely to mar the enterprising spirit of the company and loosen the cohesiveness of esprit de corps, let alone the principles of providing a customer with the best quality beverage in a social yet personal environment between one’s house and job. Besides, the company’s provision of full health care benefits to all employees, ranging from the corporate heads to part-time attendants in stores points to the veracity of Schultz fostering of social conscience in the course of making profits, withal.

Onward is a testament to the steadfast adherence to cardinal principles of playing a good clean competition in a business world without becoming a tainted soul. That is, achieving success in promoting its entrepreneurial profit growth and humanistic idealism is all over but the shouting. It might make the reader wonder if Schultz has heard the adage of Ralph Waldo Emerson during his lecture to the audience in the height of the Lyceum Movement: “Knowledge, plus moral character, promotes business success.” All in all, Schultz’s touchy-feely narrative surprisingly devoid of self-aggrandizement or ostentatious display of his lifetime achievement, relates a tale of a man whose ambitious but admirable philosophy of entrepreneurship rigorously kept against the insurmountable odds with  the heart of a man responsible for his legion of employees and their families appertains to the reader in one way or another. Upon reading the book, the reader will feel a bit privy to his/her regular Starbucks on a next visit in a nice sort of way.