I have recently read an article about popular instapoets from one of my subscription magazines and been appalled at the author’s dyspeptic raillery on the poems of the known poets and brazen-faced mockery on the literary merits of the works by playing a role of agent provocateur following the instapoets just to mock their works with malice.

Just because one does not like another’s work doesn’t ipso facto endow the person with right to desecrate the work and to insult the author by putting him/her in the pillory and, thus dispiriting the mind and the heart that are indeed “noble” and respectful. As a hobbyist writer of my blog who has the temerity to write in English, I am now indeed in more sorrow than in anger that there might be agents provocateur or double agents in hides of followers intent upon deriding my amateurish but sincere writings.

The instapoets, bloggers and anyone dabbling in the craft of writing are the cult of Knut Vonnegut’s maxim: “To practice any art, how well or badly, is to make your soul l grow. So do it.” I hope the author and his likes will understand it with magnanimity of the learned literati who will not use their learning to reason against these noble spirits.

Leisure in nature finds good in everything with time to stand on the top of the hill and stare the world under with thrill. Nature indeed requires her times of preservation, so that it will be a free luxuriant spa for all who labor and heavy laden with the existential needs and those who are in the crossroads of spiritual quest for truth. For you will find books in the trees, sermons in streaming brooks, and music in every sound that the earth produces. 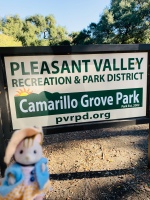 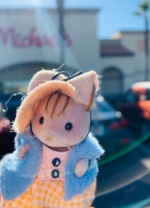 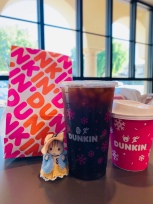 Photo taken with Focos
When the Chariot of Apollo started racing at full speed thru the aerial hippodrome in the early morning, she decided to go out and watch the splendor of the golden racing that brightened up the earth after several Sundays’ absence of the spectacle.

So, she first sauntered at the park where K-9 school students were taking classes. Then she went to an arts and craft store to buy stuff to decorate her next year’s traveler’s notebooks in which she will write her reading notes and all sundry things. Thereafter, her ceremony of beautiful Sunday was served with delicious refreshments at a donut shop that she didn’t expect to find in the Wild West.

Apollo’s racing has long been finished with his twin sister Artemis taking over the celestial domain with stars and the Moon. She looks out the windows and realizes that this Sunday is fast approaching Monday tomorrow like a fashionable host. “Live a little, comfort a little, cheer thyself a little,” said the Bard. She thinks that life shouldn’t be complicated indeed. 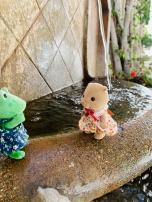 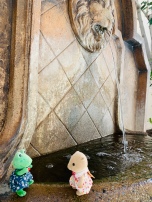 They find the secret fountain and love the sounds and scenes of the pounding water.

Fran Frogg and Brenda Beaver are especially happy at the sight because of their aquatic proclivities. Kate Cat is listening to Handel’s Water Music and enjoying the moment of pleasure to herself.

Pleasure and mirth fills their mind.

5:15 PM to Florencia. Iris looked at her iPhone clock and felt secured because the time was working nicely with her wish to stay longer until the train departed. The cappuccino was still pleasantly warm in her hands, and she loved the aroma that enveloped her tall slender figure like a shimmering halo of rainbow sunshine. The iridescent mist of instant euphoria was clothing her with a veil of poised status that fused mysterious confidence with graceful humility. Emboldened by this sudden transformation, Iris pulled herself out of her glass castle and lifted her beautiful deep liquid brown eyes to the outside the world of her own. Into the sea of her diamond eyes, the images of love and beauty were cast like magical apparitions, bewitching her senses and sensibilities which were otherwise harnessed like a pair of tamed horses. Iris felt that she could forgive all and love all at that moment of euphoria. It showed that a cup of good coffee could do wonder to anyone as it had done to Johannes Sebastian Bach, Albert Camus, Napoleon Bonaparte, Jonathan Swift, and Ralph Waldo Emerson.

In this caffeine-induced euphoria, Iris did not know she was radiant with her pretty smile. The smile was her most prized jewel. When she smiled, she was sweets to the sweet. It was like a flower blooming around an oasis in a desert, and everyone liked it. It’s as rare as a pearl found in a clam, and it’s this rarity of her smile that kept herself distant from the melee who demanded of her frequent smiles. And who would have known that her pearly smile would have caught the sight of Hector? Yes, it was Hector, the mysterious man with a Byronic face and Olympian physique sitting three seats away from Iris, the smile enchantress. Reader, you should understand that Iris was usually a skillful driver of her Chariot of Mind, keeping tight rein on the always recalcitrant Horse of Appetites. But at that moment, Iris’s chariot was shaking, and the impudent horse was not responding to her stern command to behave. The harder and more she hit the horse with a goad, the more and harder the horse rebelled against the pain until it became mad with a wild cry of agony. It was the cry of the restrained nature. For the nature of the impudent horse was to act according to its beastly desire, the primal cry of the wild. The ancient Greeks regraded love involving man and woman as the most passionately sensual emotion in which only Eros dominated because it was primarily physical, encompassing canal pleasure. Was it that Eros and Eros only that reigned in Iris’s entertainment of this rebellious chariot of the mind with the wild cry? Iris did not think so and liked to believe it wasn’t. After all, Iris was chaste, and she believed that she would live as a living goddess like Artemis or Athena, independent of men, of children, flying outside the boundary of marriage and attachment.

Hector was watching this curious woman all along. He did not know why, but something was telling him that she was different from other women whom he had known and lived with. She looked both woman and girl in her tall thin body. She was beautiful with her chiseled face and large dark brown eyes that looked rather serious and dolorous. Her high-bridged straight nose gave her an impression of patrician woman whom no one could easily be jovial with. The beauty and the grace of her were not in want, and yet she wasn’t exactly the fairest of all the women he had met. Besides, there was a touch of beyondness to her, which was oddly attractive with her rather sophisticated urban demure. The graceful estrangement emanating from this unknown girl/woman reminded him of a deer that lost a track of her kind in a deep forest. Or did she look like a she-wolf voluntarily detached from the pack? Whatever it was, he was hooked on it and wanted to know more about it. The It was in her, and she was in it. He wanted to be in it, willingly and madly. Was it an illusion or just a whimsical mood of a bored artist? Hector was all for the adventure, and he’s up for it like Odyssey in preparation of his adventures between the sea and the devil.