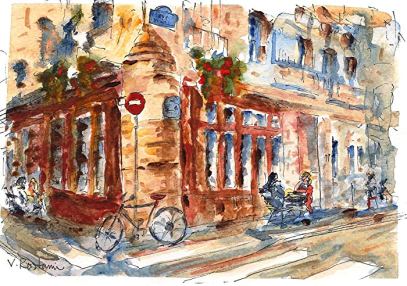 There was nothing mattered except the oracle of the witch at the moment. Iris was confused and terrified in the amalgamation of the sacred and the profane. It was part of a realization of her premonition and part a prescription of her destiny if there was such thing as predestination. The heavenly revelation thus transpired: she was born with powers ascribed to the lineage of the ancient priestess; her Tread of Life was so thin that it was likely to be cut off by mortal dangers, such as attending funerals where ghosts and ghouls were always roaming around to recruit new ones; and she would not have suitors because of the invisible aura surrounding her to protect her from impurity of Eros or caprice of Aphrodite or anything even remotely like it. Reminding all of this, regurgitating the words of the witch while working toward the coffee shop around the corner, Iris’s mind was so laden with the unbearable prophecy and irreversible revelation that she then knew how Atlas felt when he was sentenced to carry the Earth on his shoulders as celestial punishment.

The coffee shop was large and spacious with a few customers scattered around doing what they deemed appropriate to while away their time. Some were talking on their cellphones; some on their laptops, and others confabulating about trifle things. With her freshly brewed cappuccino, Iris took her seat by the window where a man in a casual attire who looked to be in the early fifties with headphones and a laptop was sitting. Usually, Iris would not sit near a strange man because of her shyness of a member of the opposite sex. Yet, today she was feeling strangely comfortable sitting near him. Yes, Him, that is. Not Any Man, and This Man Only. Like a somnambulist in her nightly trance or a crewman of Odyssey mesmerized by Song of Ceres goddess, Iris was drawn to the seat close to the man. She looked at him discreetly: a crown of rich black hair was gloriously placed upon his shapely manly head. His slim chiseled face was lavishly adorned with large dark brown eyes deeply set between his high but slightly bumped Roman nose. His full lips were closed but looked as if nothing vulgar would come out therefrom. His posture was lean and tall and straight. To add another layer of Golden Laurel Wreath to this Grecian statue, there was something about this unknown beautiful stranger: intelligence magically interacting with the sweetness of the mind creating an aura of a Byronic mysterious artist, all in the artistry of nature so radiant and fatal. Iris was secretly absorbing all this intoxication of deadly charm and feeling guilty at the same time.

The pleasure of Guilt, as it were, became bigger, harder, and taller in Iris. The more she tried to concentrate on reading her unfinished book, the more violent his figure seemed to rebel in front of her very eyes, the eyes that were also as big and brown and beautiful as those of the homme fatal sitting three seats away from her. ‘Perish the thought!’ was the command of Iris to the Wild Horse of her Mind Chariot, but she knew it better than it was futile. My Dear Reader, who can decry Iris at the door of her infirm will, secret entertainment of her fancy, or illegitimacy of her fantasy when our faculty is rather instinctive than reasoning, rather physical than metaphysical?  Irresistible, Irresponsible, Irreversible, irrespective of Reason, Iris loved the sensation that anesthetized her burdens of fate and willingly lost herself therein. It was a secret lovemaking, and she loved it.