Imagine this. You are the only person marooned somewhere far away from your world. You have all heard the dystopian chimes of every brave new world from George Orwell’s totalitarian society of 1984 to William Golding’s terrifying Lord of Flies and Aldous Huxley’s eponymously prophetic Brave New World. Yet, you have not realized how it would be like until you enter such a world alone. The world you face now is the amalgamation of all the worlds described above that exist in the selfishness of lettered cases. What would be your impulsive action toward the stupendousness of the incredible event? Besides, what if your best work a la your reason and hope as good as your pride and hubris can present turns out to be a grand Faux pas?

Planet of the Apes (1968), directed by Franklin J. Schaffner, is a crackling Sci-Fi movie that translates the dystopian thematic of a world in a phantasmagorical display of primal humans and intelligent primates that upends the existing hierarchy of creations and reconstructs the fundamental doctrines of the Origin of Species. It is an advanced society of chimpanzees and orangutans that talk smart, which the 20th-century American astronaut George Taylor (played by Charlton Heston) is hard to stomach with human pride. He then becomes a deformed kind of human slave of the apes in this new brave world where from their God to a prison guard, the apes are the master of the humans. What a wonder this brave new world, that has such apes in it. 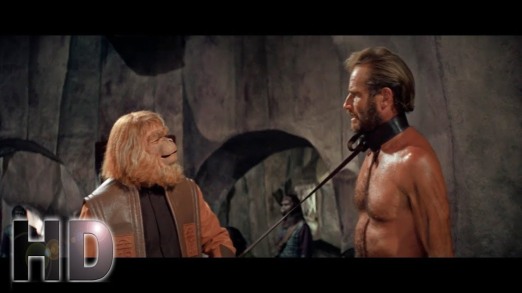 The movie is a visually compelling Juvenalian satire that mercilessly but humorously mocks the targeted human hubris that brings about its destruction in an attempt to replace the role of God. The thinking, talking, and even kissing apes mirror the social behaviors that are no more particular to humans who fail to preserve humankind’s prerogatives by the self-destruction of humanity from catastrophic nuclear war. Taylor embodies the hubris in the optimistic veneer of audacious hope that he will find a way home, to his kinds. It is this hubris that causes the downfall of humankind and himself. He hunts desire and hopes together in the constant resistance against the apes despite the impossibility of returning to earth with the defunct spaceship. His faith is nothing but a waking dream, haughty defiance against the reality, dreaming an awareness of odds in his favor.

The figure of Taylor is one oddly fascinating mixture of panache and wit, sarcasm, and heart, wrapped in the likeliness of Shakespeare’s Macbeth. Talyor represents dramas of human characters wonderfully packed in the imposing physique, towering the apes as if to manifest the sovereignty of man over the apes. The pathos of Taylor in the climactic denouement of the movie reveals his frailty in recognization of the collapsed grand narratives of hope, disillusioned wishes, and shattered dreams as uttered by Macbeth: “Life is but a walking shadow, a poor player that struts and frets his hour upon the stage. And then is heard no more. It is a tale told by an idiot, full of sound and fury, signifying nothing.” Will this be an empty outcry of failed civilization, echoing the collective pathos of the human consciousness for the corrupt world at its heart?