Think. What do Kubler-Ross Model of Five Stages of Grief, Spinoza’s Amore Dei, Nietzsche’s Amore Feti, and Logotherapy have in common? That it is all about how to accept fate as it is, the stupendousness of truth, the veracity of suffering as a way of finding meaning in what you have to endure. Religion is a poetic way of describing the suffering, a burden of life, another intuitive interpretation of looking at the pain and yielding to it as a destiny. But it is easier to be said than to be done when your spirit is plunged at the lowest tide of life and sees no hope of descrying a land of opportunities in the doldrums. And it betrays your noble hope and begins to shoot albatrosses then become like the Samuel Taylor Coleridge’s Ancient Mariner. Or so it seems.

All the wise in the civilization of humanities told their progeny the reason for bearing the unbearable because they all knew about one thing: that’s what life was about. It is what it is and will be as long as humans exist. In his theory about Amore Feti, Nietzsche posited that evil was what prevents us from striving toward our goals and that power to affirm what we have is the only way to move on in the sailing of life, however terrible it would be. Knowledge and its pursuit are a must-have to shape an essential feature of our consciousness to keep sanity in contextualizing the whys and wherefores of struggles in life with an active mind. It is indeed a noble psychological philosophy, but what about people who are not intellectual as the renowned philosopher but just ordinary earthlings stuck in the existential backwaters of the rut? Did Nietzsche, Spinoza, or Kubler-Ross have to worry about livelihood? Well, Spinoza was a watchmaker, so he should have known something about making a living, but still, he was autonomous in pursuing his intellectual Elysium without having to worry about the burdens of daily life.

I had not known what the darkest night of the soul until now, and the fear of losing myself has finally descended upon me. C.K Charleston said madness is when you lose yourself except for your reason. Shakespeare quipped when nature, being oppressed, commands the mind to suffer with the body, and you would become derailed from norms of behavior and faculty of cognition. I prefer the latter version of madness because if I lose myself, then it should be all or nothing for the complete liberation of my spirit from the chains of enslavement. From insidious dominion of gaslighting to dreadful ascribed duties that I didn’t choose, to endless sadness, and cursed estrangement, I now know why the Ancient Mariner killed the sacred albatrosses whom seamen believed to be the souls of the dead sailors. Ire for the delusion of hope, retribution for the betrayal of faith, and freedom from the pain of unrealized dreams drove the Ancient Mariner to execute the birds and then become one of them, never returning but always wandering.

If only. I long for a sign, omen or augury, that can show me what to do or if I can break this vicious circle of unhappiness that has been cursed on me. No Ouija Board. Why? I don’t trust bargaining with the Devil because he, as a henchman of Satan, is like an angel of God in reaping as many souls as possible to build their armies or populate their cities of the Beyond. Then why do I find myself pleading to God by default while writing this for not ignoring me when he prefers the beautiful and the pleasant? Spinoza and Nietzsche, I beseech you to persuade me with your best reasonings of why I should believe that life is still worth living! 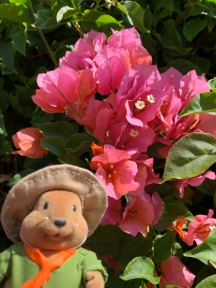 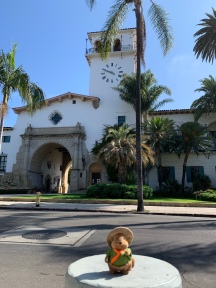 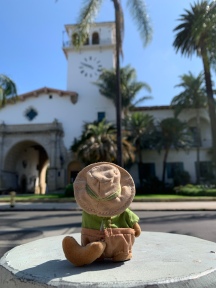 To see the pretty summer sky is poetry breathing life. The world outside books provide the optical pleasure that sparks up otherwise monotonous landscapes of everyday life. Indeed, it was such a beautiful morning that would make you forgive your persona non-grate with the love of mankind. It was a kind of jolly morning that made the whole world seem kin.  So Tuco took a lovely jaunt in the beautiful historic Santa Barbara County Courthouse this morning. He went there alone in the bliss of solitude that always flashed upon his inward eye for creative inspiration. One casual glimpse at Tuco might give you an impression of an ordinary guy with beer-belly spending his evening time and Sundays in front of a TV set. Contrary to his embonpoint, avuncular physiognomy, Tuco is an artist, a poet, a thinker. He is, what Edgar Allam Poe would call without hesitation, an intellect with passion. 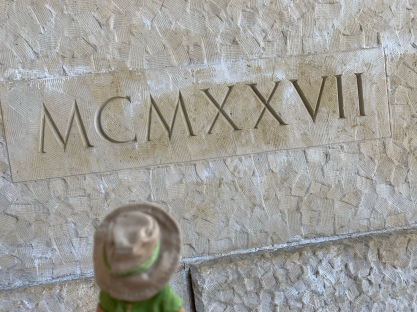 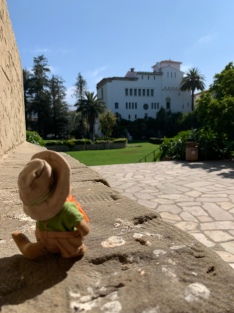 Tuco chose the Santa Barbara Country because its Spanish colonial architectural style reminds him of the familiar civic landscapes of his childhood hometown. The Courthouse, located at 1100 Anacapa Street, in downtown Santa Barbara, California, is famous for the Spanish Colonial Revival Style building designed by Charles Willard Moore and completed in 1929. It was designated a National Historic Landmark in 2005 for its beautifully distinctive colonial-style respective of the Spanish cultural heritage harmoniously attributing to the aesthetic character and history of California. 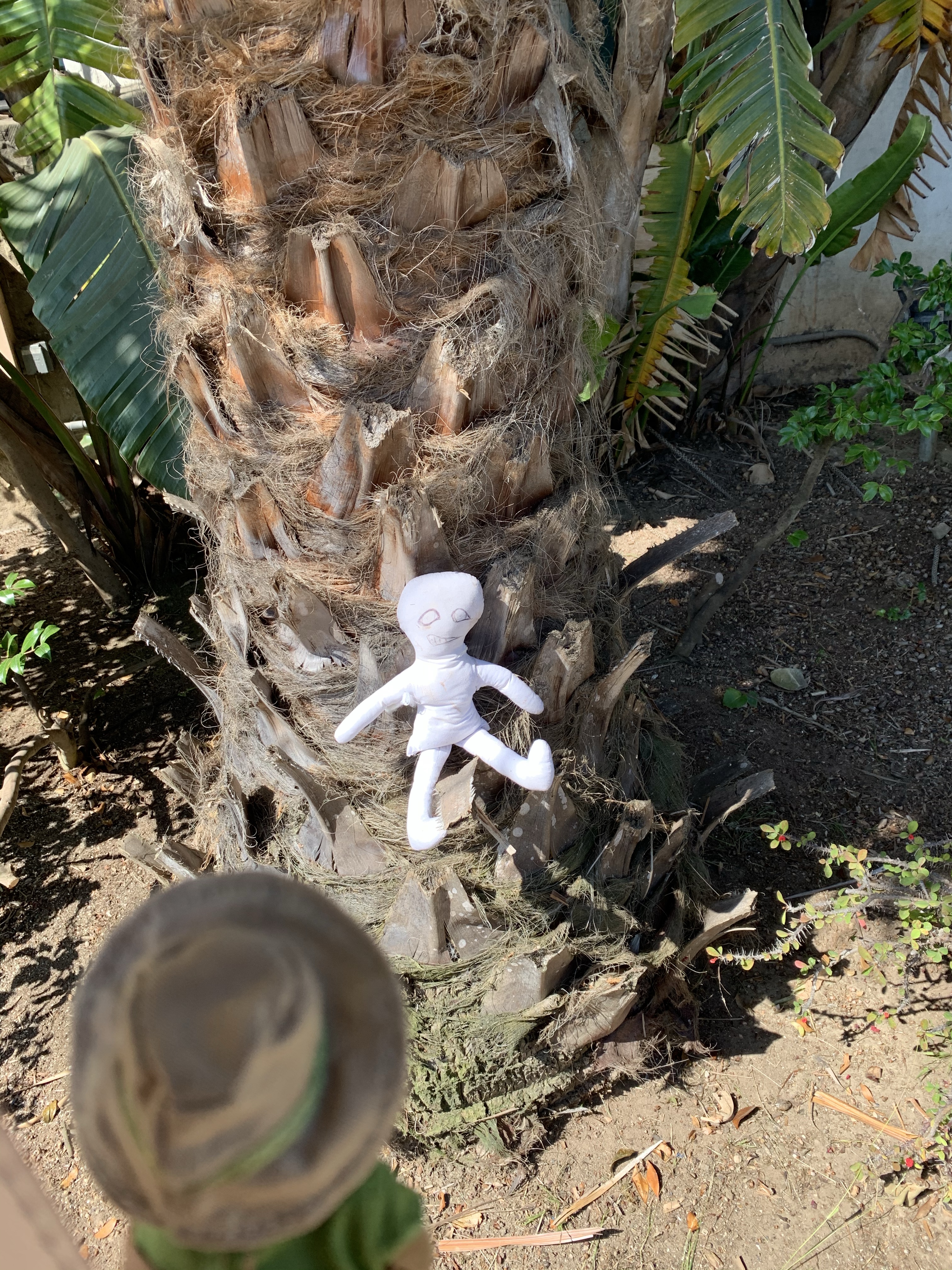 While strolling around the Courthouse, Tuco’s eyes were suddenly fixed on a white doll attached to the palm tree. It was a tawdry but scary-looking doll that gave him the creep down on his spine. ‘Did someone who had a beef with the court’s decision put this voodoo doll here as a curse to the Courthouse?’ Trepidation for the unknown terror began to spring from his tactile sensory organs, making him momentarily delirious. He was becoming unsure of whether it was a wise decision to take a picture of the evil doll or even to come to the Courthouse. Was it an omen? ‘Oh, come on. Are you kidding me? It’s just a doll, more or less. No need to waste your energy on contriving meaning to the ugly voodoo doll.’ With this sudden forceful exercise of affirmation, Tuco wended his way toward the beautiful scenes of the earth, the sky, and the view of the world. 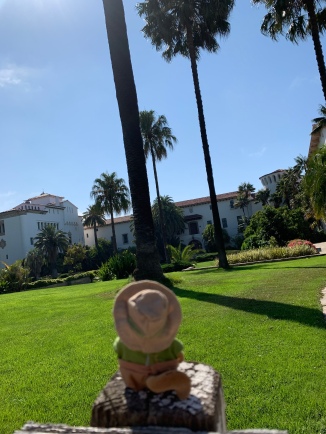 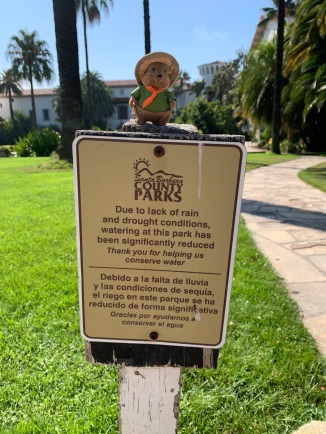 Tuco exclaimed, “How hard it is to hide the sparks of nature!” The sky was high and blue, the lawn was full and green, and his eyes filled with pleasure. Today was the end of his vacation, and he lamented about returning to work for livelihood. However, the beauty of the scenery made his otherwise grim and dreary Sunday lovely, and Tuco thought life was not supposed to be all that hard and unbearable. 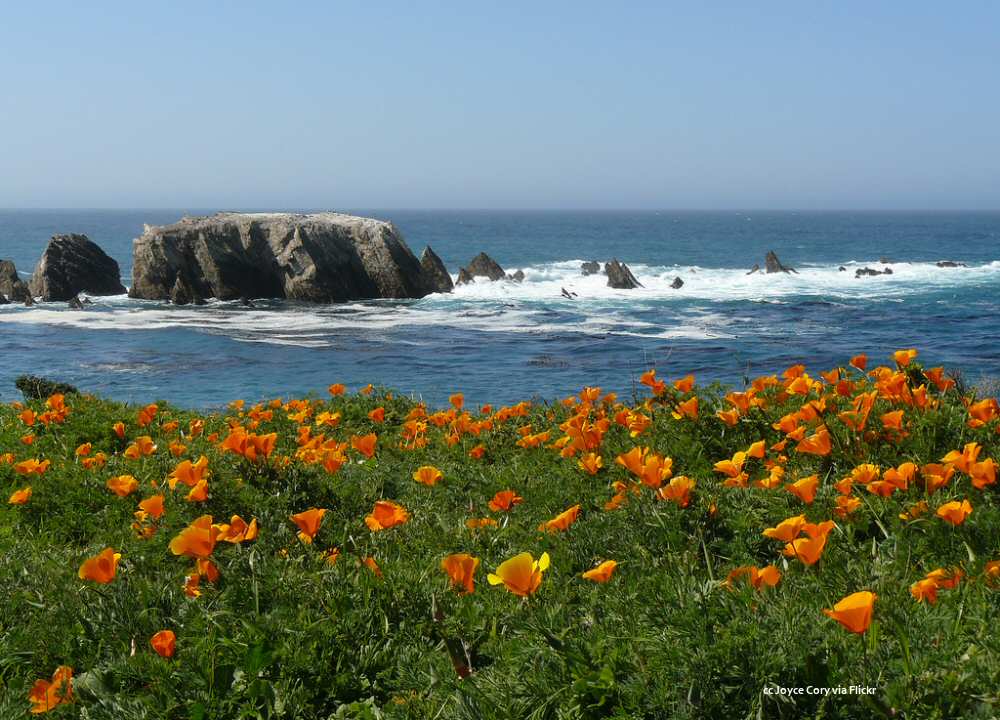 If she is pretty, she is never lonely because she is wanted and loved. This much is truth, no? Beauty works a miracle in the eyes of a dull man without imagination and of a cruel man without tears. Oscar Wilde, who always had something to say about beauty, affirmed that it’s better to be beautiful than to be good because beauty captures your attention. So, if you are bereft of beauty, then you must work very hard to get people to know who you are. Beauty is indeed a joy for all seasons, rain or shine, and is also a privilege to be loved first before loving.

Judy always must be in love with someone who didn’t even know of her existence because the feeling of love would transform her from a plain Jane to a sultry Cleopatra as if a pixie had cast a glamour spell on her, pitying her denied sense of pleasure and detachment from a constellation of lovers. Judy, despite some flattering feedback on her appearance from onlookers, was always discontent with what she saw in the mirror that seemed to reflect her what she didn’t want or couldn’t see in her true self. She felt that her features were in want of spectacular beauty that would make herself loved, and her solitary disposition dipped in an exclusive flavor of selectiveness doubled the inaccessibility of the worldly sensuousness that even not so pretty or homely women were allowed as their feminine rights.

Judy was sitting like a pillar of melancholy at the dinner table embarrassed by the ordinariness of her appearance in the presence of handsome Fred who made Judy feel like an awkward wallflower that nobody would pay attention to. You would say she obviously lacked self-confidence, but self-confidence is also built upon the kind of feedback you get from others. Judy was a firm believer of existentialism which says that experience exceeds essence and of Robert Cooley’s sociological theory of “Looking Glassed Self” that you become the way how others treat you. Or you might say what she lacked in appearance could be compensated by her intelligence, wits, or those other “inner” qualities, all of which she did possess. But let’s be honest, my dear readers. Beauty is the power and the wisdom of women regardless of leaps of times, distances of places, and differences of races. Any man- rich or poor, bigoted or liberal, young or old- loves a pretty woman and will act on his best behavior with kindness. Likewise, Judy, who was not drop-dead gorgeous, always kept herself guarded with a stern look at the sight of a man who might be unkind or curt. However, Fred was different. He was being very affable to her with a genuine smile. This time Judy wanted to claim her right of happiness and make her existence visible to her figure of love, so she secretly wished for a glamour spell to change herself from an insignificant wallflower to a beautiful rose that would make Fred crazy about her.