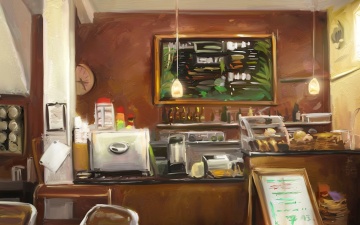 He wanted to talk to her but didn’t know how to begin. He did not want to look overtly anxious, and yet he was obviously anxious. Part of it was his urge to find out if she was the right one that matched his gossamer imago, and more of it was his untamed machismo that even his arete, the harmonious combination of moral integrity and physical discipline, could not surmount. In the age of Amazonian resurgence of matriarchy on the crest of #MeToo campaign, the subject matter of indomitable feat of virility could be highly volatile, incriminating even. But Hector was being none other than a man himself and going against nature would turn him into a closet monster or a spectacular hypocrite.  Besides, Hector was an artist who was unafraid of following his heart according to the True North of Nature. He belonged to the race of the untethered, the bold and the beautiful, and he knew it. All of it, all that he had was working toward his wish to speak to her, the mysterious woman sitting three seats away from him.

When it reached the zenith of the urge, Hector couldn’t hold it any longer, and it finally erupted from his lips: “Excuse me, miss. I forgot to bring a pen with me. Do you have a spare one by any chance?” It was the best excuse he could think of because the woman was writing in her notebook. She seemed startled at first by a strange man’s request for a pen, but soon her fear of a stranger relented at his polite manner handsomely juxtaposed with his sonorous voice and beautiful eyes that radiated both warmth of the soul and allure of the flesh. Iris was always sagacious of people’s characters, which was her gift and curse of the Fates, and she saw genuineness in this strange but beautiful man’s eyes in an aura of charisma, a mythological power ascribed to the Olympians and select hybrids of mortals and immortals. In a phantasmagorical display of the Greek heroes and gods, Iris was filled with mysterious confidence that gave her a status that fuses the capricious power of a fairy with the sensuous charge of femininity. She finally fished in a pen from her pencil case and gave it to him. “Thank you, Miss. These days people do not seem to carry around a pencil case.” Hector thought that he talked too much and instantly regretted it. But it was a reflex of his heart that knew better. It was working slowly, the kindling of the amber that was beginning to grow. No, my dear reader, it wasn’t that usual playboy’s antics, that sleek glib of a smooth operator because Hector wasn’t the sort. Nothing namby-pamby about Hector’s sensitive nature, nor the supra-abundance of the embryonic courtship that might not even develop with fanfare. But nothing could be further from the truth – the truth that both Hector and Iris were votaries of aesthetic pleasure, the cult of Psyche and Eros, the seekers of Eleusinian Mysteries in their own rights.

Iris wanted Hector to go on, to take her on, to lead her on. Despite her instant bestowal of confidence, she was still wrapped up in her own clock of anonymity and invisibility like a fairy who was visible to the mortal eyes when she wanted to. A fairy whose sentiments were different from the mortals and who could be both impish and angelic according to her whims and caprice. For a fairy by nature was amoral and could fashion in whatever forms she would prefer. Thenceforth, Iris was lamenting that a fairy at the time of her birth did not bring her a gift of beauty that could captivate a man of her heart. Surely, she was told beautiful, sultry even, but her resemblance to Cassandra was the sine qua non of her solitude, although she would like to insist that it was her voluntary choice. The grace and the harmony of her features would make a beholder think that they were aesthetically proportioned, yet she wasn’t exactly a Helen of Troy for whom Paris, the prince of Troy, left his nymph companion in distress and for whom thousands of ships launched to win her love. Alas, poor Iris! I knew her, my dear reader. I commiserated with her spiritually. I should have cast glamour spells on her so that she could be instantly gorgeous at that time. But would it be a kind of beauty she really wanted?… I wondered. I questioned: then, would Iris- a lesser beauty, a confused fairy, and a distressed Cassandra- make this mysterious man interested in her soul until they became two by two and about what went they to? In this fey meditation, her spirit was pivoting ecstatically from the mind’s castle and swiveling in wonderment. Iris was secretly invoking the power of all the fairies in the limine spheres, the slice of seacoast between low and high tides, deepening foliage between field and forest, and the slope-land between plains and mountains.